Pleadings That Need to Be Filed in Louisiana Succession Cases

After a loved one’s death, you want to settle their affairs as quickly and smoothly as possible. After you’ve considered your options, your next step is to begin the succession process in a Louisiana court. 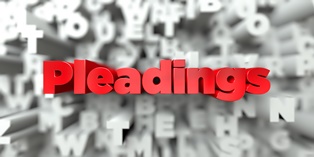 What You Need to File to Start a Succession

Generally, there are five types of documents that make up initial succession pleading forms. The following pleadings should be filed with the court:

The Petition for Possession outlines the key facts in the succession case and about the decedent (the person who died). The Petition should include:

If the decedent had a valid will, it should be filed with the Petition for Possession.

At least one person must sign the Petition for Possession. However, if not all successors sign the Petition, the person who does sign should have written consent from the others that they have accepted the succession, and that consent should be reflected in the Petition.

Affidavit of Death, Domicile, and Heirship

If the decedent is divorced, it is also a good idea to include the case name, docket number, divorce judgment date, and the court where the divorce was decided.

The sworn descriptive list of assets and liabilities must include all of the decedent’s assets at the time of death. The law doesn’t require all debts to be included, but this is something you should discuss with your succession lawyer.

Other things that pass outside of the succession process should not be included on this list—such as life insurance policies, annuities, IRAs, retirement or pension plans, and bank accounts with co-depositors.

If any potential heir is renouncing or rejecting their succession rights, the renunciation should be made known to the court.

Every year, our Louisiana succession and probate lawyers help hundreds of Louisiana families with succession issues. Let us use this experience on your behalf. We know how to anticipate potential problems and questions from the court. We will make sure that all of the right pleadings are filed and all of your rights are protected. Call us, or fill out the contact form on this page to have someone from our team conatct you