What is the purpose of a codicil?

A will is a legally binding document that remains valid until it is formally revoked or superseded. While Louisiana law allows for a last will and testament to be amended with a codicil, this document could thrust an estate into uncertainty if it is not properly written and reviewed. 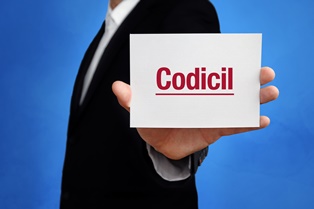 A codicil is a special, written document that amends a will. Codicils typically explain, modify, or revoke a previous will provision.

Uses of a Louisiana Codicil

While a codicil can be used to alter a last will and testament in any number of ways, estate planning attorneys usually recommend that it only be used for minor modifications. If a codicil is used to overhaul a will in its entirety, it is often easier to simply re-write the will than to ensure that the codicil does obfuscate the testator’s intent.

What Makes a Louisiana Codicil Valid?

If you have already submitted or filed a copy of your will with your parish probate court, you should also file a copy of your codicil in the same court. Keep a copy of the codicil alongside your will.

Can Codicils Be Challenged?

Even bad-faith challenges to a codicil could be costly. If the petitioner does not prevail in court, the personal representative may have to use the estate’s resources to defend the codicil. Since probate litigation can be costly and time-consuming, a codicil challenge could drain an estate’s resources before beneficiaries ever receive their inheritances.

A codicil is not always the best way to update an estate plan. Since codicils can be easily challenged, you should always have an experienced Louisiana estate planning attorney review your revisions before you execute your codicil. Please send Scott Vicknair Law a message online, or call us at 504-264-1057 to schedule your consultation at any time of the day.